A court is a tribunal, often a governmental institution, with the authority to adjudicate legal disputes between parties and carry out the administration of justice in civil, criminal, and administrative matters in accordance with the rule of law. In both common law and civil law legal systems, courts are the central means for dispute resolution, and it is generally understood that all persons have an ability to bring their claims before a court. Modern courts often need court interpreters to […]

In linguistics, prosody is the rhythm, stress, and intonation of speech. Prosody may reflect various features of the speaker or the utterance: the emotional state of the speaker; the form of the utterance (statement, question, or command); the presence of irony or sarcasm; emphasis, contrast, and focus; or other elements of language that may not be encoded by grammar or choice of vocabulary. Prosody is probably the biggest challenge for translators and interpreters in their quest to master multilingual communication. […]

These trials mark the end of World War II and birthplace of simultaneous interpreting.  The Bavarian city of Nuremberg was chosen as the location for the trial of leading Nazi criminals after the end of World War II. The Nuremberg (Nürnberg in German) trials required instant communication in four languages: English, French and Russian – languages of the victors, and German. This communication was made possible by simultaneous interpreting for the first time ever in human history.

If you are referring to talent and aptitude, best interpreters are born. We all need to encourage young talents to enroll interpreting courses in the university and educate them well to secure the future of our industry. It takes years to train a qualified interpreter. Unless best students do not choose translation & interpreting over law, medicine, arts or engineering, we cannot meet the talent gap. If your event is tomorrow you are probably too late, because good interpreters have […]

There is no golden standard for learning objectives of an interpreting class, because it depends on the level of your students, their previous courses, class size, available equipment and last but not the least trainer’s (your) professional background not only as an interpreter but also as a trainer. Being a great interpreter does not mean that you can teach well. And I am here to help. As usual, my proposals in this article are based on my experience and assume […] 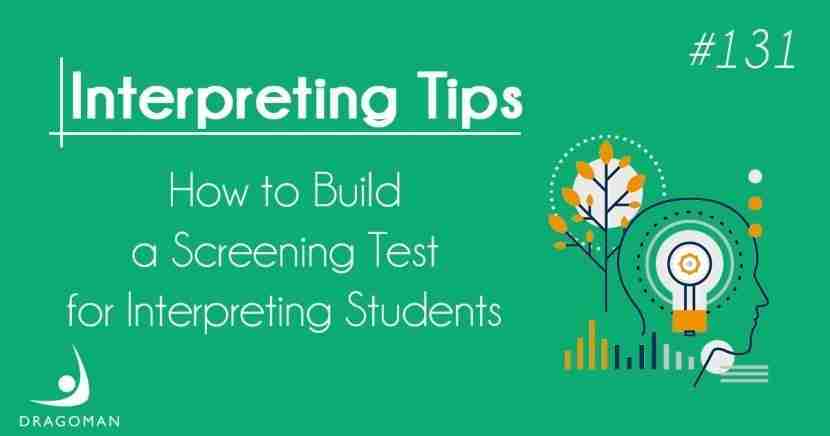 There is no golden standard on preparing a screening test for interpreting students. You are supposed to find your own way. In this article I would like to share my approach. Screening test is a must: For one, not every student can become a simultaneous interpreter. Giving false hopes to young minds will only increase their desperation before your realize it is too late. Second, interpreter trainers are usually professional interpreters and they do not have the time and energy needed […]